No business grows without the help and dedication of many people. Over the years, the contribution from our employees and their belief in our vision has a made profound impact on the growth of our business.

Each person has brought  his or her own unique qualities. Everyone has something to offer. Some people are organized and neat, some innovative and trend-setting, others are fussy and particular.

Over the years we have been blessed with all kinds! As you read about these people please remember how important they are to Winfrey’s Fudge & Chocolates. 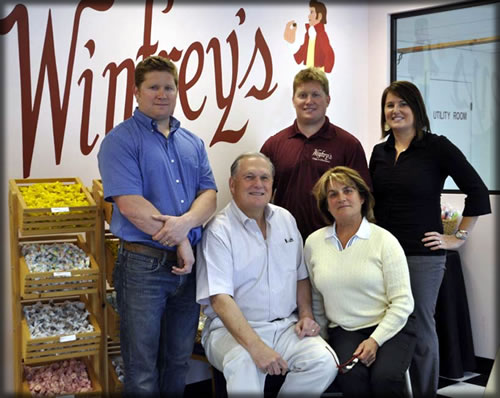 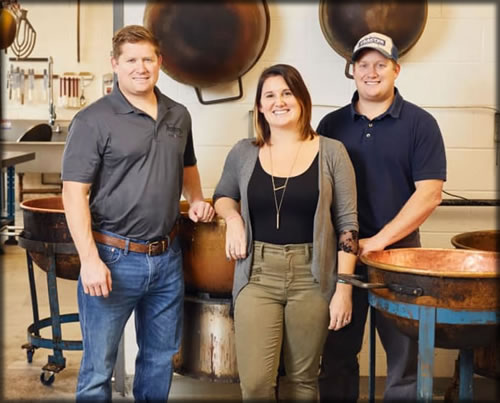 Scott Winfrey has over 20 years of “candy making” skill he learned from his experience of working with his father. He is also a graduate of the Gus Pulakis School of Confectionary science. He attended Wentworth College in Boston where he developed his skills in repairing the equipment needed to manufacture Winfrey’s Fudge & Chocolates. Scott is Winfrey’s Chocolatier.

Jillian Winfrey-Pallazola has a multi-faceted position at Winfrey’s. With her marketing degree she heads up the social media, print media and marketing of Winfrey’s. She also oversees all the Retail stores. In addition, Jillian is Human Resource manager.
Mark Winfrey uses his finance degree from Umass Amherst to juggle all the office tasks. He also is controller of distribution and receiving of Winfreys products.

Together these three tri-owners of Winfrey’s Fudge & Chocolate collaborate to continue to build a company dedicated to quality products with excellent service.

Melissa
Melissa was our niece and our cousin and at Winfrey's, she was our friend, our shining light.

Sweet Melissa, on loan to us from 1980 to 2005. On peritoneal dialysis at 3 months, first kidney transplant - MGH at 9 months, one of the world's youngest transplant patients, second transplant age 11, third kidney/liver transplant age 25. It was the life she knew. She accepted it. She never tried to challenge her world, she accepted it and happily.

If she had to go back into dialysis... well that was the way it was. If she couldn't drink alcohol (or even too many liquids) on her 21st birthday... that was the way it was. She lived her life always with a smile. While people around her defined her approach to life as "strong", she defined it as "busy", when she had dialysis every other day and "fun" when she went to New Hampshire with the girls from the Rowley candy store, or dressed up like a witch on Halloween and "exciting" when she got engaged to Brad the love of her life and "incredible" when she thought of becoming aunt Melissa.

She would always smile and say "Ya, I can do that" whenever I asked her to leave her desk and help wrap chocolate lollipops, or stand at the candy store register to give an extra hand during holiday sales, or put bows on our boxes of chocolates. No job was beneath her or above her. She lived smack dab in the middle of life. She lived every moment like she wouldn't see it again. She accepted every person for who they were without judgment. I am not making this up, honest! The world has a little less light without her but once she gets settled, I think she will be shining down brightly on all of us.

I would like to thank one person from all of us who knew Lissy, Linda. For her courage and commitment for making all those difficult decisions for 25 years. Without them, we never would have known our sweet Melissa.

Vinny
Assistant Production Manager, Vinny is Scott's right-hand man. Has known the Winfrey’s since he was in 3rd grade. He played baseball and football with Mark & Scott Winfrey. In High School Vinny was a Tri-Captain of the Varsity Football Team with Mark & Scott. Theirs is a friendship people only hope to have! Now these three friends have teamed up to build Winfrey’s Fudge & Chocolates. Vinny is a fine Candy Maker at Winfrey’s.

David
Our head fudge production manager, has been with our company since 1981. He began after graduating from Peabody High School. David’s persistence and determination have helped him to achieve his production goals. In one day he has manufactured over 3000 pounds of our cream & butter fudge single-handed! David has grown up with our company and has built his own family of 5. Four strong sons and one beautiful daughter.

Paul
Heads up our shipping and receiving department. His exceptional ability to keep things neat and orderly has forced all at our business to be more organized. Paul has been with Winfrey’s since 1990. He came to us a month before we moved to Rowley and has been a stable force in running our shipping department. Paul also provides clever and creative interpretations to his job at Winfrey’s. He is the author of our vision statement “the perfection of confections without exception!”

Tricia
The familiar voice you hear is Tricia's. She is head of the office department, taking orders and keeping everything running as smooth as possible. Do not move her cheese!! Tricia's exacting demands keep the office neat and tidy. She is always lending a helping hand – you may even see her out in the Retail Store during busy season!

Michelle
Michelle heads our busiest stores in Rowley & Stoneham, MA. She runs a tight ship and keeps the store running very smoothly! With an extensive background in management and as a mother of three, Michelle makes her job look easy!

Tiffany
Tiffany aka “Tiffy” is former nanny to all of the Winfrey third-generation children. She has adjusted smoothly to a management position in our Wenham and Middleton stores. With endless amount of vigor and energy, Tiffany juggles these two stores seamlessly.